Freddie Mercury: A Life, In His Own Words 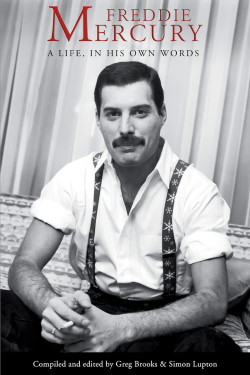 Freddie Mercury: A Life, In His Own Words

ONE PARAGRAPH SUMMARY
by Phil Symes

Published to coincide with the release of the ‘Never Boring’ CD/DVD package, comes a newly updated edition of the book “Freddie Mercury: A Life, In His Own Words”. Compiled and edited by official Queen archivist Greg Brooks and Queen visuals producer Simon Lupton, this new expanded edition contains over 8,000 words of text not present in the original print. The additional material has been drawn from sources not available or known to the authors at the time of compiling the original work, much of it never before published before and sourced from newly discovered interviews given by Mercury for magazine and newspaper articles that were ultimately not used, as well as from rare radio programmes or Queen Specials found on precious old cassette recordings and reel-to-reel tapes discovered within the Freddie archive. The nearest thing to a Freddie Mercury autobiography as it is possible to achieve, “A Life, In His Own Words” is a meticulously assembled collection of moving, witty, and often irreverent quotes from the man himself. Told across 20 chapters and 194 pages, this is Freddie’s life in his own words - delivered in his own inimitable, unpredictable, invariably funny, often poignant, and always entertaining way.

“Freddie Mercury: A Life, In His Own Words”. Now available to order from Amazon on Kindle and in print.

This book is the nearest thing to a Freddie Mercury autobiography as it is possible to achieve. A moving, witty, often irreverent collection of quotes from the man himself, meticulously compiled and edited by official Queen archivist Greg Brooks and Queen visuals producer Simon Lupton. An essential read not just for fans of the band, but anyone intrigued to know more about one of music’s most endearing and enduring performers.

Freddie rarely talked about himself to others, and so the interviews he did undertake – carefully assembled for this book, and some of them unpublished until now - offered an intriguing insight into a man who outwardly exuded confidence and arrogance, but whom, behind the public perception, spent long periods alone searching for happiness. The truth was that Freddie was painfully shy and uncomfortable of anyone new to his company of close friends and invited guests.

Determined to succeed to the point of willing to be “frivolous and preposterous” to win over an audience – “I love the feeling of it. It’s greater than sex!” - Freddie’s unique focus and drive spurred him on to become precisely what he set out to be, an iconic global superstar. But as the pages turn, we see a Freddie Mercury gradually changing the priorities in his life to one more sedate and necessarily changed by the cloud of the HIV/AIDS virus beginning to shadow the gay community.

Freddie lived an extraordinary life in his 45 years. As he said himself, he lived life to the full. It is hard to believe he has been gone for 28 years. There will always be more to learn about the little boy Farrokh Bulsara, who became Freddie, and then Mercury, and there will never be a time when we know it all. All we can do in his absence is to gather together the words he left behind in his various conversations and articles and present them in a way that we hope he would have approved of.

This comprehensive insight goes some way to endorsing the fact that as well as being ‘a singer with a song’, Freddie Mercury was a very great deal more than that! For a man so generally reticent to talk, he certainly covered a lot of ground in his twenty years of interview encounters. Through 20 chapters over 194 pages, this is Freddie’s life, told in his own words - 70,000 of them no less! - and all from his unique perspective and of course delivered in his own inimitable, unpredictable, invariably funny, often poignant, and always entertaining way. “There are times when I wake up and I think, “My God! I wish I wasn’t Freddie Mercury today.”

“I love the fact that I make people happy, in any form. Even if it’s just half an hour of their lives, if I can

“Freddie Mercury: A Life, In His Own Words”. Now available to order from Amazon on Kindle and in print.